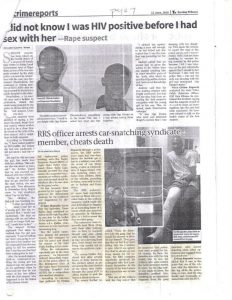 An undercover police officer working with the Rapid Response Squad (RRS) of Lagos State Police Command, Iliasu Saidu (34), recently arrested the ring leader of a suspected four-member car robbery syndicate and cheated death by whiskers after he was shot by the gang leader.

He has, however, been praised by the Lagos State governor, Mr. Akinwunmi Ambode, for the resilience and doggedness he displayed.

Crime Reports learnt that the operative, Iliasu Saidu, (34), sustained an injury on the right leg after he was shot by the leader of the syndicate, one Wale Jamiu a.k.a Ijebu, who, unknown to him, had been monitoring him.

But the police operative, despite his gunshot wound, still managed to pick his pistol and shoot the suspect in his right thigh, leading to his arrest.

When the information reportedly got to the state governor, he reportedly ordered immediate transfer of the police officer to the Emergency Unit of the Lagos State University Teaching Hospital (LASUTH) for a comprehensive medical attention.

According to information gathered by Crime Reports through a police source, the RRS undercover team had two days before the incident got a lead to a robbery case with the arrest of one Musa Sadiq, a tailor at Obalende area of Lagos Island, who was receiving stolen vehicles from robbers. Most of the vehicles, according to Musa, were sold to buyers in Kaduna and Kano states.

The RRS undercover team had reportedly worked on Musa who provided links to the robbery suspects, which made the shot RRS officer to disguise as an intending buyer of a Lexus which was snatched at gunpoint in Okokomaiko, in a bid to arrest the four-member gang.

The undercover team reportedly took Musa along with them after tutoring him on how to comport himself and play along with the RRS team. But, as they were devising their plan, their target too was being very careful not to expose his syndicate members.

The source further disclosed that after several hours of delay tactics by the robbers aimed at ascertaining the true identity of the buyer, they finally brought the Lexus SUV to Alaba Market to pick the buyer at about 9:00p.m.

The source further revealed: “Then, the detective told the gang that he should be allowed to drive the car himself. They gave him the car but they were telling him the direction to take. After it was agreed that that he should go and bring money for the vehicle, the RRS operative reportedly informed his colleagues who had positioned themselves in the vicinity of the hotel where the transaction was to take place.

Crime Reports’ source added that it was at this point that one of the robbers shot the detective in the leg while the policeman, in turn, shot the ring leader and eventually arrested him with the SUV.

SMALL THINGS WE SHOULD ALL DO, BUT RARELY DO.