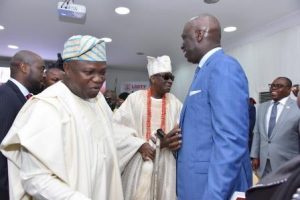 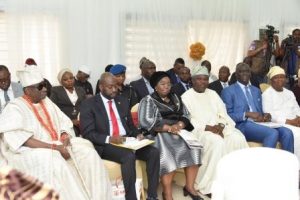 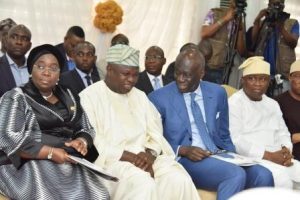 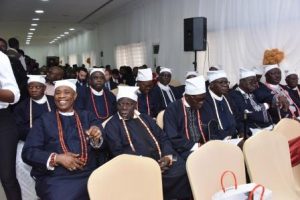 The Lagos State Security Trust Fund (LSSTF) recently had its 11th Town Hall Meeting on Security with the Governor which doubled as the celebration of the Fund’s 10th anniversary since creation. The celebration attracted high net worth individuals from all walks of life and top government functionaries, security service chiefs, Traditional rulers led by His Royal Majesty Oba Babatunde Rilwan Akinolu and citizens of Lagos to discuss in assurance that the peace being enjoyed in the State is not compromised.

The Chairman Board of Trustees of the LSSTF Mr. Oye Hassan-Odukale who welcomed guests to the event said that “over the 10 year period, the Fund had become a source of succor to Lagosians and a shining example of an enduring Public Private Partnership, such that other State Governments and even the Federal Government have sought to understudy the Fund so as to replicate it. As a matter of fact, a bill to establish that of the Federal Government is at the National Assembly at the moment (i.e. The Police Trust Fund bill)”.

Expressing sincere appreciation to His Excellency, Mr. Akinwunmi Ambode for his continued support and understanding, the Chairman said “it is worthy to note that the Lagos State Government remains the largest donor to the Fund with a contribution of about 72% of the total donations”.

The Executive Secretary of the Fund, Dr. Abdurrazaq Balogun, in his report thanked donors and the founding fathers of the Fund for their donations and commitment in the last 10 years. He said that the direct impact of the Fund’s intervention in the security in the State is that Lagos is now the most secure State in Nigeria. He noted that night light is back, several social and commercial events are now held at night, hence impacting positively on the socio-economic growth of Lagos State to maintain its position as the Land of prosperity which attracts all and sundry. He stressed that the Fund is a proven model that is highly sustainable in enhancing the security of Lagos State, by providing equipment and logistics to all security agencies in a prudent, transparent and accountable manner. The Fund has continually explored various means of raising funds for the sustenance of security in the State. Also organizations are encouraged to engage in consistent funding structure as part of their Corporate Social Responsibility (CSR), in order to enhance strategic planning for improved security in the State as the Fund cannot plan without a predictable revenue stream for the security of all.

As 2018, precedes the 2019 general election, he appealed to Lagosians to be security conscious and support the effort of Lagos State under the administration of Governor Ambode.

Also speaking at the event the Commissioner of Police, Lagos State, Mr. Edgal Imohimi, said that the intensifying of community policing strategies and the increase in police visibility in the State had resulted in a 35 per cent decline in crime.  However he stated that despite the massive contributions by the Lagos State Security Trust Fund, the Command still requires more logistics such as communication gadgets, patrol vehicles/motorcycles, etc. in order to operate at its maximum capacity.

In commemoration of the 10th anniversary of the Fund, 10 Police Officers were awarded for their exemplary discharge of duties and gallantry.

The guest speaker Mr. Abayomi Zamba, a retired Director, Department of State Security (DSS) spoke extensively on the theme for the day “Improving Security through Technology, Intelligence and Community Participation in the Lagos State”, stating that security issues and challenges are as a result of partial or full reactions to some proximal or distal actions.

He recommended possible interventions which may foster better security in the state such as creation of community neighborhood linkages, increase power supply to provide illumination especially in crowded places, establishment of team of first responders for rescue missions, placement of CCTV centers in specific places to assist in giving directions amongst others.

Some of the comments by guests at the event includes:

His Excellency Governor Akinwunmi Ambode in commending the Fund for its efforts over the years said that “As a Nation our Country is faced with a lot of security challenges which has put immense pressure on our national resources and has necessitated a Public Private Partnership as a way of bridging the resource gap, hence the need for our continued insistence on electing progressive leaders in our state and we all should be proud of what we have achieved together”.

The Governor in a pronouncement promised that in view of the various contributions by stakeholders at the event, a security summit would be held early next year to properly articulate the security roadmap for Lagos State and the summit is to be organized by the LSSTF. He also directed the immediate donation of 30 BMW power bikes for security agencies to be used by the quick response teams as recommended by the guest speaker.  .

He concluded by thanking organizations and individuals who have continued to partner with the Fund through their support in cash and kind to build the most effective security infrastructure in Lagos and urged others who have not contributed towards this noble endeavor to do so, saying that “when the rain falls it falls on everybody’s house”.

“Be assured that the Lagos State Government is committed to rid our society of those that opt for crime. Our continued provision of equipment and logistics for the security agencies operating in Lagos is evident to this. Our government will also continue to provide state of the art infrastructure in order to achieve our vision of making Lagos a safe, prosperous and smart mega city,” he said.