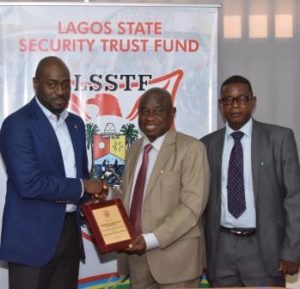 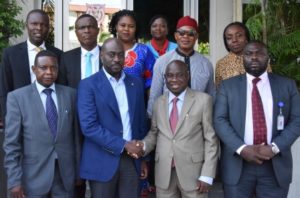 Executive Secretary and Chief Executive Officer of Lagos State Security Trust Fund (LSSTF), Dr. Abdurrazaq Balogun has said the peaceful atmosphere and security of lives and property being enjoyed in the State can be largely attributed to the massive support to security agencies by the State Government and the private sector through the LSSTF.

He was speaking while receiving delegates from the Delta State Security Trust Fund led by its Executive Secretary, Hon. Sam Osasa Esq. on a familiarization/working visit to understudy the Fund in the effort to replicate the agency in Delta State.  Dr. Balogun, management and staff of the Fund welcomed the visiting delegates to the office of the Fund.

Delivering a presentation on the LSSTF, Dr. Balogun said that the creation of the Fund was necessitated by the increasing menace of crime in the State and the inability of the security agencies particularly the Police to tackle these crimes.  It was highlighted that the gross underfunding of the Police and other security agencies had made security operatives ill-equipped to effectively discharge their duties, hence the establishment of the Fund in 2007 by a Law of the Lagos House of Assembly.  The objective, “To provide money for the acquisition and deployment of security equipment and other resources as shall be found necessary for the effective functioning of all Federal, State, Local Government and other security agencies operating in the State, and also for the training and retraining of security personnel”.

The LSSTF was deliberately modeled as a PPP approach in order to create autonomy for the Fund, ease of administrative processes and encourage private sector participation. The activities of the Fund are coordinated by members a 10 member Board of Trustee (including the Executive Secretary) with 70 percent of its members from the private sector who are well established and respected people in the society.  The primary function of the Board is to raise funds from public and private organizations to procure and maintain crime fighting equipment for the security agencies.  This they have done with total commitment and dedication which is visible in the sustenance and success of the Trust Fund.

He pointed out that the Fund has also recorded giant strides due to the commitment of His Excellency, Governor of Lagos State, Mr. Akinwunmi Ambode who has made security paramount in his administration based on his understanding of the importance of security in attracting both foreign and local investments in the State for its economic growth and stability.  Dr. Balogun emphasized that the success of the DSSTF lies in the commitment and total buy in of its State Government.  Also the critical selection and appointment of men or women of integrity as Board of Trustees of the Fund was very important as their influence was essential in fundraising.

He went further to say that the transparency and accountability of the Fund over the years has enabled it gain and retain the trust of its donors which is also very key to their success, adding that “since inception, the Fund’s accounts have been audited annually by International Audit Firms, promoting the Fund’s foundational core values – ‘PART’ which stands for Prudence, Accountability, Resourcefulness and Trust”. The Audited Financial Statements is published annually in the Fund’s Town Hall Meeting brochure, two national dallies (as stipulated by law) and on the Fund’s official website so donors and the members of the public can see how their donations are being utilized.

The Commander, Rapid Response Squad (RRS), ACP Olatunji Disu, who was present at the gathering, told the visiting delegates that the Rapid Response Squad (RRS) is a unit created from the Lagos State Police Command saddled with the responsibility of providing swift response to emergencies in the State.  The Commander added that the RRS has enjoyed immense support of the Lagos State Government and private organizations through the Fund, which has motivated them in the effective discharge of their duties.

Hon. Osasa and other delegates expressed their appreciation at the end of the working visit noting that the process of understudying the Fund had been an eye opener to him and his team.  He stated that he has acquired more knowledge and was better informed to advise the Delta State Government moving forward.