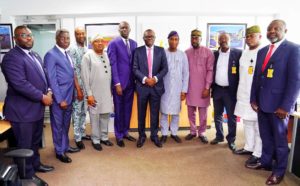 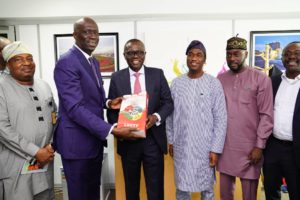 The members of the Board of Trustees of the Lagos State Security Trust Fund led by its Chairman, Mr. Oye Hassan-Odukale, paid a courtesy visit to the Governor-Elect, Mr. Babajide Sanwo-Olu and his Deputy Dr. Obafemi Hamzat, to congratulate them on their victory at the March 2019 gubernatorial elections and to intimate them on the activities of the Fund.

The Governor-Elect who was a pioneer member of the Board of Trustees of the Fund was briefed on the activities of the Fund the in last 11 years.

No doubt that the Lagos State Security Trust Fund has been very instrumental in the relative peace and security enjoyed in the state, however the Chairman of the Fund stated that the underfunding of security agencies which led to the establishment of the Fund still existed while they also have to grapple with the menace of kidnapping, terrorism/insurgency, drug abuse/trafficking, cult-related crimes, etc.

The Executive Secretary/CEO of the LSSTF, Dr. Abdurrazaq Balogun noted that some of the challenges experienced in the administration of Fund included; over reliance on the Fund by security agencies operating in the state, donor fatigue, and increase in cost of security equipment.  He emphasized the need for more corporate organizations to frequently contribute their quota to the improvement of security in the state.

The Governor-Elect in his response stated that he was very familiar with the objectives of the Fund since he had coordinated its activities in the conceptual stage even before its establishment by Law.  He also stated that he was aware of the security challenges in the state as he had continued to take a keen interest in the security of the state and his meetings with several groups of people have also revealed a lot to him.  He added that the Trust Fund was deliberately modelled as a Public Private Partnership to leverage on participation/contributions from the private sector to assist in the funding of security in the State which is very critical to the success of the Fund.  It is on record that other states have continued to come to understudy the Fund to replicate it, while at the Federal level, a bill to establish a Police Trust Fund is being considered at the National Assembly for the same purpose.

He stressed that the needs of Security agencies operating in the state will be reevaluated so as to further enhance their activities noting that technology based solutions will be adopted to fortify the state security architecture.

Mr. Sanwo-Olu thanked the Board of the Fund for their visit and re-assured them of the new administration’s commitment to prioritize security and its willingness to work closely with the Fund to continue to advocate for support from the private sector and well meaning individuals to ensure that the State is safe and conducive for people and businesses to thrive.