Criminals must not be given a breathing space in Lagos State. This was the charge by Governor Babajide Sanwo-Olu on Tuesday to policemen and security operatives under the State-controlled security outfits.

Sanwo-Olu said the security of lives and property remained the topmost priority of his administration, tasking the security operatives in all formations not to spare any effort in keeping the peace in Lagos.

The Governor spoke during inspections of operation bases of Rapid Response Squad (RRS) in Ikeja and the Lagos State Taskforce on Environmental and Special Offences Enforcement Unit in Oshodi.

Sanwo-Olu said Lagos must not be a safe haven for crimes, directing the officers to maintain constant security surveillance across the state and flush out criminals from their hideouts.

The Governor, however, cautioned the officers against impunity in the discharge of their duties, urging them to carry out their responsibility with humility and interact with residents in manners that would uphold respect for human rights.

Also, heads of the security outfits, including the RRS Commander, Olatunji Disu, a Deputy Commissioner of Police, and the Taskforce chairman, Olayinka Egbeyemi, a Chief Superintendent of Police (CSP), joined the Governor in the inspection.

Sanwo-Olu said the residents deserved a premium quality of security to justify the resources being committed by the state to fund security agencies’ operations.

He said: “To whom much is given, much is expected. I want all the people of Lagos to feel the operation of the new improved RRS, which must ensure that criminals and people that have criminal intention do not have a space in communities across the state. We are aware of the efficient operations of our security outfits, but we must raise the bar of policing in our communities to re-assure residents and investors of their security.

“The residents are your partners in securing the state. I want to see humility and respect for people’s rights in the discharge of your duties. Spare no effort in dealing with criminals, but the offenders that deserve correction should be corrected without impunity. Lagosians expect so much from us in terms of improved security; you must make the state safe for law-abiding residents.”

The Governor noted that the intention of establishing the security operation outfits were to protect the people and their properties. He said taxpayers should not feel threatened by the operations of the security personnel, urging the officers to engage their duties in line with professionalism.

Sanwo-Olu said he expected to see security operations that would have human face, warning officers against abuse and extortion of residents. He said the government would not hesitate to keep to its responsibility in supporting and motivating the officers deployed for the special security operations.

“Your responsibility is to continue to discharge the duty for which you are paid from taxpayers’ money. If any of you is called upon to discharge your duty, we expect you to do it with professionalism. You should not engage your duty with impunity and without human face to it. Let the people feel the positive impact of your activities.

“We are aware of your challenges. We have gone round and seen what is on ground. Some vehicles need to be repaired; a few vehicles need to be bought. Some logistics need to be provided and more equipment required. These demands will always be there. That is why we have come here to see for ourselves. We will continue to live up to the expectations required from us and discharge our responsibility as at when due. But, we demand premium service in terms of security; the people will be the one to assess your efficiency.”

Commanders of the security outfits used the occasion to notify the Governor of their operational challenges, while also demanding for better welfare and quality equipment that would enable them discharge their duties.

Corporal John Bankole, who spoke on behalf of operatives attached to RSS outfit, complained about the challenges faced by officers in getting treatment at public hospital in cases of accident and injury. There were also complaints about delayed allowance,inadequate patrol vehicles, shortage of kits and uniforms.

Responding, Sanwo-Olu ordered the Permanent Secretary of the Ministry of Health to ensure immediate treatment of security personnel injured in the line of duty in all state-owned healthcare facilities. The Governor also assured the policemen of improved motivation and welfare.

CSP Egbeyemi used the occasion to reel out the successes recorded by the Taskforce, pointing out that the outfit had crushed the notorious “Awawa boys” in Agege and seized more than 4,200 motorcycles for various offences. 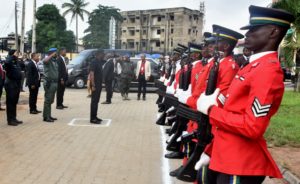 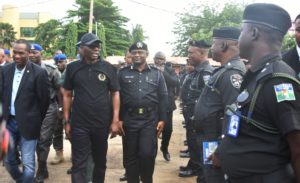 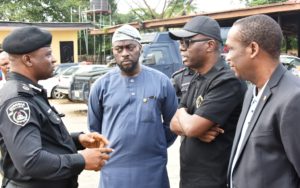 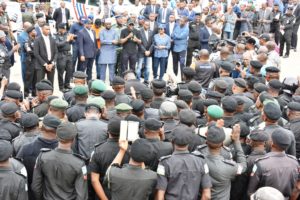 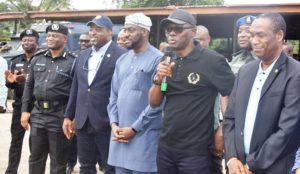 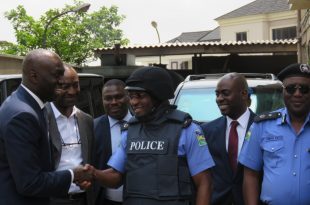